Denis served a five-year term on the board and he served as Editor-in-Chief of the journal. Serving on the Board is plenty of work. The biggest job, of course, is organizing the conference, which Denis did in San Antonio back in 2011. It is a delight to remember that conference: the venue, the food, the people, the strolls along the boardwalk. But there is a lot of other work to do on the board in other capacities: taking notes, answering emails, delivering talks, engaging in productive meetings with one’s colleagues, and much more. Denis did all of this with great thoughtfulness and care, and his contributions were much appreciated.

Serving as EiC of the journal is even more work. And it is so much work in part because of Denis’s efforts to make the journal what it is today. Denis served as EiC of BEQ from 2011 to 2016. In 2011, when Denis started, BEQ received 167 submissions. In the year he stepped down, BEQ received 307 submissions. (This year we are on pace to receive almost 400 submissions, a truly terrifying number.) The five year impact factor in 2011 was 2.000. In 2016, it was 3.881. Of course we try not to put too much stock in numbers, but these things help, and Denis is part of the reason our numbers are so high.

One of the biggest things Denis did for the journal was move publishers. The SBE owns BEQ – that is why we can afford such lavish yet reasonably priced conferences, with ample food and drink. BEQ generates money, and that money is plowed into the Society, especially the conference. In 2011, the journal was published by the Philosophy Documentation Center, a small but capable publisher, as it had been for many years. But along came an offer from Cambridge, an internationally respected publisher with a major global footprint. BEQ publishes great stuff, and the question was: would a bigger publisher help us get our great content out to more people. In consultation with the SBE board, Denis decided it would, and set about the hard work of transitioning the journal from PDC to Cambridge. I was there; it was painful! And a ton of work. But Denis and his team pulled it off, and the journal is now in a better place than it ever has been.

For all of these reasons and more, on behalf of the entire award committee, it is my honor to present Denis the Society for Business Ethics’s 2020 Presidential Award for Service.

George received a Ph.D. from the University of Michigan in 1971, specializing in moral and political philosophy. After a brief stop at the University of Minnesota-Duluth, George spent 20 years at the University of Tennessee, and the final 10+ years of his career in the business school at Georgetown University. While he transitioned to Emeritus status in 2010, George has continued to be active on the publishing front, with many new publications to his name.

His first articles in the field we all know and love as business ethics were incredibly influential and widely reprinted. These were “Privacy, Polygraphs and Work,” published in 1981, and reprinted eight times, and “Strict Products Liability and Compensatory Justice,” published in 1984, and also reprinted eight times. If you read them, it is easy to see why they were reprinted. They are models of clarity, relevance, and argumentative precision.

George has contributed significantly to the study of trust, global business ethics, and marketing ethics. His classic article “Marketing to Inner-City Blacks: PowerMaster and Moral Responsibility,” published in Business Ethics Quarterly in 1998, explores issues of power, domination, race, and respect that are deeply relevant today. No wonder it has been reprinted 10 times. Perhaps my most favorite article of George’s is his “Private Corporations and Public Welfare,” published in Public Affairs Quarterly in 1992 and reprinted multiple times thereafter.

For all of these reasons and more, on behalf of the entire award committee, it is my great honor to present George the Society for Business Ethics’s 2020 Presidential Award for Scholarly Achievement. 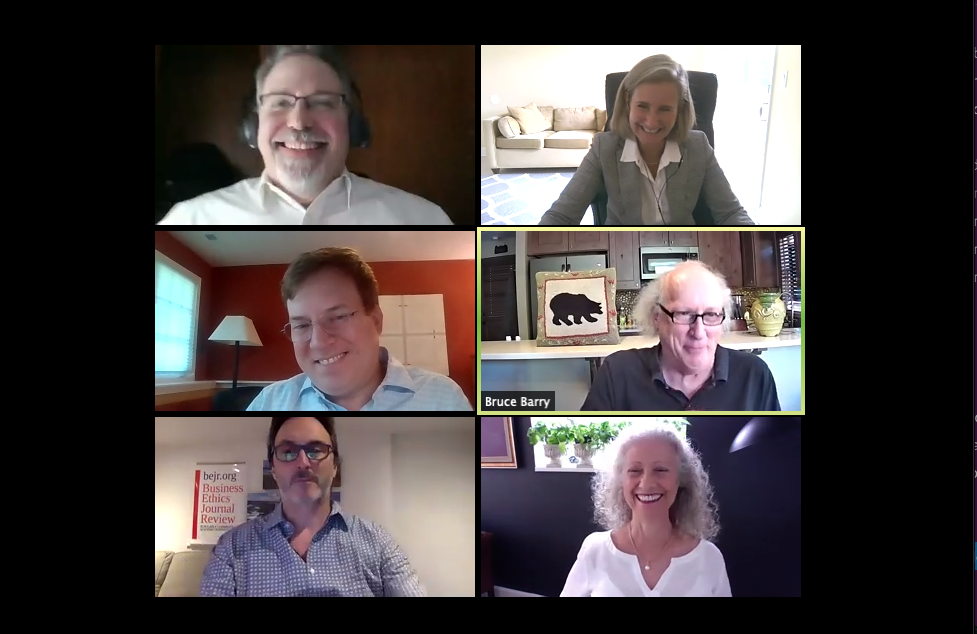 Thank you to all who attended the 2020 virtual conference. We enjoyed 80 concurrent papers, panels, or posters, submitted from 5 continents. We also celebrated 40 years of the Society for Business Ethics!

Although this year’s conference was held virtually, members were still able to engage one another in research, discussion, and community.

Save the date for upcoming conferences!

Making the Ugly Calls: How Google Approaches the Question of What Ads Are Allowed

Santiago Mejia
Weeding Out Flawed Versions of Shareholder Primacy: A Reflection on the Moral Obligations That Carry Over from Principals to Agents
BEQ 29(4), 519-544.