Announcing a new, free, online resource: a robust glossary of Adam Smith’s 1776 The Wealth of Nations, at www.thewealthofnations.net. The glossary contains over 250 words, and is growing based on feedback.

Everyone who teaches business ethics will be aware of the work of Adam Smith, and many will also be aware of how often Smith has been misunderstood. Far from a zealous defender of private enterprise, Smith was actually deeply suspicious of businesspeople, of corporations, of crony capitalism, and of colonialism. But in many cases, understanding Smith is further hampered simply because, well, he wrote in 18th Century English. For students, that can be a problem. When Smith uses the word “want” for example, he usually intends something closer to “lack,” rather than “desire.” When he uses the word “communicate,” he actually means something closer to “transport.” And when he refers to a “late act of Parliament,” he means a recent one. All of this adds to the difficulty of understanding one of the most important literary works in the last several centuries.

The free online glossary I’ve created is designed to help students and other novices minimize mistakes of the latter kind—problems rooted in vocabulary. Conceptual difficulties and questions of argumentation are left to the professor!

The glossary singles out words that are dated, along with those the meaning of which has shifted in important ways since the 1770s. For each word, a quotation is provided, along with a clarification. The aim is not to provide detailed definitions, but rather clarifying substitutions that will speed up reading and enhance comprehension. 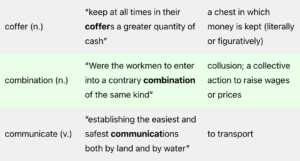 Please check out this new resource, and feel free to send feedback to me at chris.macdonald@ryerson.ca